Looking to grow your beard? If yes, you should understand how long it will take you to get a fully grown beard. A period of 3-6 months should suffice.

Perhaps you have the beard already, then congratulations! You have what so many can only wish for. Sadly, having a beard doesn’t make you stand out in a positive way. You will need to rock the trending beard styles to attain that unique look you crave. Interested? Look no further, we have compiled a list of some classy beard styles for this year.

Before we let you in on these beard styles, there are a few things which are worthy of note. Information available on grooming trends has highlighted the huge role your beard plays in your general appearance.

Previously, beards spoke of masculinity, power, and maturity. Today, a full grown facial hair is all of this and more.

Men are very detailed when it comes to picking beard styles that will work for them all day and every day. While there are varieties of trendy beard styles or facial hair patterns, what works for everyone differs. What fits a friend perfectly, might not work for you. All this boils down to knowing more about a beard style before opting for it.

Before we go on to look at the top beard styles for 2018, here are some factors you should consider before choosing a beard style.

The structure of your face is important. If you possess a rectangular face, you shouldn’t grow your beard long, pointy or triangular. A rectangular face is long, and opting for a pointy beard will only accentuate your face leaving it looking longer than it actually is. Add some width to your face by ensuring your facial hairs grow higher up your face and cheeks.

If you have a triangular face with a more prominent chin, you should drive all the attention elsewhere. Avoid having full hair on your cheeks. Aim for your sideburns to be well-groomed, so it practically squares off at the bottom.

If you have a round face, a triangular beard format should do just fine. A groomed beard style which is shorter on the cheeks and longer near the chin would be perfect. You might have a goatee and small stubbles on your cheeks should do the trick.

If your face is shaped like a heart or you have a “weak chin,” opt for designer stubbles on the sides of your cheeks. This should give you the appearance of being ‘rough and ready.’ Leave more length of beards on your chin to accentuate your jawline.

If you have a square and strong jawline, you’re in luck. A lot of men will part with patchy hairlines just for to possess something like yours. However, when choosing a beard style that will suit the shape of your face, you should not opt for a style that will exaggerate the shape of your face. A triangular or rounded chin area will ensure that you don’t end up looking like Johnny Bravo!

If you have a diamond shaped face (narrow forehead and wider cheekbones), you should keep more hair on your chin to cancel out the effects of your cheekbones. Here, a squared chin gives the impression of a more balanced facial structure.

This is one of the most trendy and popular beard styles. It gives you that manly and super attractive look. Polls conducted on beard styles and which do women find more attractive and yes, you guess right – the heavy stubble won! One good thing about the heavy stubble is that it requires a lower amount of care compared to other styles. This makes it less expensive to keep. It looks even better after a period of 9-10 days. You certainly can’t go wrong with this beard. The five O’clock shadow beard style became really popular in the 1980s when it first came to the scene and hasn’t been considered less-trendy ever since. The five O’clock shadow beard style appears slightly cleaner and shorter than the heavy stubble. But it retains that masculine, bad-boy look the latter is known for. Owing to its shortness and cleaner look, it is excellent for men who don’t have a lot of facial hairs. 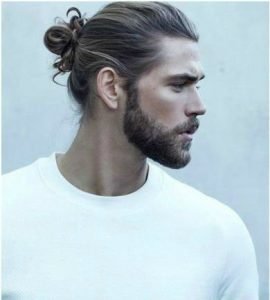 This beard style is one of the hottest and most attractive beard styles of 2019. Its look is meant to compliment various hairstyles like the full hair or man-bun hairstyles. Those who wear this look often appear to be very rough or wild. However, the long hipster beard is the most expensive beard style to maintain. The full beards style is probably the oldest amongst these styles. The time it originated is hardly known, but it has beautified the faces of men; both young and old for ages. Apparently, this look hardly goes out of style. It makes one look extremely manly and attractive. If it is properly groomed, it looks really classy and beautiful. If it is not well groomed, it looks rough and ‘manly’ as well. With this style, you don’t have to worry about consistent grooming just to avoid an awkward look. There was a man who popularized this beard style and he lived in the 17th century. His name was Anthony Van Dyke and the beard style was named after him. This trendy style involves completely shaving the sideburns leaving only the mustache and goatee. This beard style commands so much masculinity and power. Many rock stars and powerful men have enjoyed this style in the past.

By carefully picking a beard style that suits you, those complimentary stares are only a few steps away. This explains why a lot of men value their hair stylist. Your dream beard is attainable. Just a little effort and you are there. Don’t give up yet!